It is such a captivating adventure that it has ensured that many of the players stay until the end. Ghost of Tsushima, a video game developed by Sucker Punch of which Sony is especially proud, boasts one of the best completion rates for an open-world game on PlayStation 4. More than 50% of players have finished the story, accompanying Jin Sakai on his crusade against the Mongol Empire in this feudal Japan.

Ghost of Tsushima, a pleasant surprise exclusive to PlayStation

Ghost of Tsushima is a title that has enjoyed a great reception both at the sales level (at the end of 2020 it exceeded 5 million copies sold ), and at the critical level. In addition, it has also become one of the favourite games of PlayStation users, and this is also indicated by the numbers. Sucker Punch’s work boasts one of the highest completion rates among open-world games on the Sony platform.

Specifically, 50.2% of players have finished Ghost of Tsushima. To get this figure, they have been based on the numbers of the Mono No Aware trophy, which is awarded to players after finishing the main story of the title. You can take a look at the numbers below: 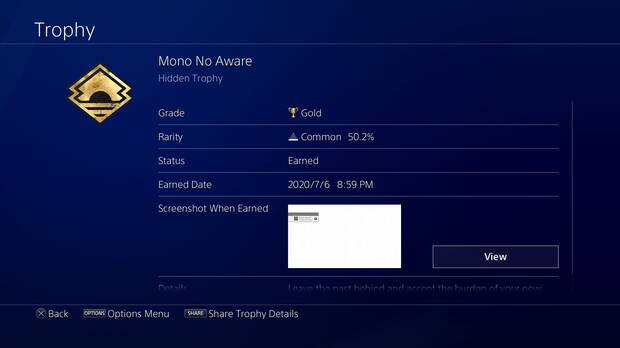 50.2% of gamers have the Mono No Aware achievement

The fact that this completion rate is so striking is because typically only 30-40% of players finish the main story in open-world games. As titles are so long and require a great deal of time, it is common for them to be forgotten unless their story manages to completely trap users. So the statistics for the Mono No Aware achievement indicate that at least half the player base has found the title attractive enough to stick around until the end.

Here, courtesy of Ungeek, we leave you with the list of open-world games on PlayStation 4 that enjoy a high completion rate, as of March 2021:

As you can see, only the video game Marvel’s Spider-Man is above Ghost of Tsushima. However, it should be noted that the title starring the Marvel wall-crawler requires about 25 and 30 hours to complete everything; while Jin Sakai’s game takes twice as long. The title, in any case, has been so well received that even the creators have been named Tsushima Tourism Ambassadors.

A God of War movie is in production alongside GOW: Ragnarok, both expected to be released around 6 months apart from each other

Resident Evil Village shows its map and the appearance of Mother Miranda, a key character